Kareena Kapoor Khan expressed her gratitude for all the wishes and blessings people showered on her birthday.

Taking to her Instagram handle, Kareena penned a sweet note that read, ‘Overwhelmed… Thank you to each and every one of you for all the love. Tried to respond to everyone… sorry if I missed anyone. It’s been an amazing day.’ 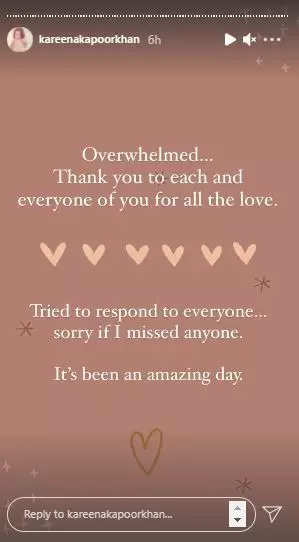 Bebo brought in her birthday in the Maldives where she is currently having the time of her life with her husband Saif Ali Khan and sons Taimur and Jehangir.

Wishes poured in from all sides from her fans and friends on social media on her special day and the actress also promptly replied to most of their posts on social media. The actress has also been sharing pictures and videos from her exotic holiday with her fans who just cannot get enough of the gorgeous diva.

Meanwhile, on the work front, Kareena has wrapped up with her upcoming film, ‘Laal Singh Chaddha’ which will also star Aamir Khan in the lead role. The movie is an official Hindi adaptation of the Hollywood movie, ‘Forrest Gump’ that originally starred Tom Hanks. It also features their ‘3 Idiots’ co-star Mona Singh in a key role.

Apart from this, she also recently announced her new collaboration with director Hansal Mehta and producer Ekta Kapoor for an upcoming project. Details of the same are yet to be unveiled by the makers. Kareena also has Karan Johar’s period drama, ‘Takht’ in her kitty.