Suhana Khan and Shanaya Kapoor are currently holidaying in Dubai with their respective mothers Gauri Khan and Maheep Kapoor. Pictures from their fun vacay have been doing the rounds on social media.

Now, we have got our hands on yet another photo where the BFFs are seen having some deep conversations while shilling in the pool. 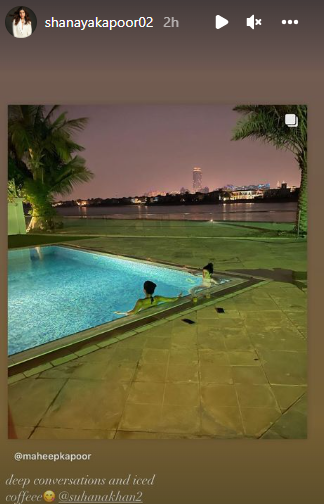 Shanaya shared the photo on her Instagram Stories and captioned it, ‘deep conversations and iced coffee’. The young divas are seen dressed in their swimming costumes.

Earlier, Shanaya also shared some gorgeous photos of herself on Instagram with her fans. Dressed in a stylish white outfit, she looked stunning as ever. The budding actress also credited Suhana for the beautiful clicks. She captioned it, ‘thanks for the clicks suu 😋🤍 @suhanakhan2’.

Suhana, Shanaya and Ananya Panday have been together since their childhood. They have literally grown up together. Even today, the trio shares a close bond. While Ananya has already made her big Bollywood debut, Suhana and Shanaya are geared up for theirs.

Shanaya will be seen in ‘Bedhadak’ co-starring Gurfateh Pirzada and Lakshya Lalwani in lead roles. The romantic thriller will be helmed by Shashank Khaitan. Suhana, on the other hand, will be seen in Zoya Akhtar’s ‘The Archies’. The Hindi adaptation of the popular comic series will also star Boney Kapoor and Sridevi’s younger daughter Khushi Kapoor and Amitabh Bachchan’s grandson Agastya Nanda in lead roles.