Vivek Agnihotri questions if ‘Brahmastra’ beat ‘The Kashmir Files’ box office with paid PR and influencers, says, ‘I am not in that dumb race’ | Hindi Movie News

Filmmaker Vivek Agnihotri recently expressed his views on Brahmastra’s box office collection. The film went on collect over 200 crores within two weeks of its release. With this, the Ayan Mukerji directorial also defeated the box office collection of Vivek’s film ‘The Kashmir Files’.

Taking to Twitter, Vivek wrote, “Hahahaha. I don’t know how did they beat #TheKashmirFiles…with sticks, rods, hockey… or AK47 or stones…. Or with paid PR and influencers? Let Bollywood films compete with each other. Leave us alone. I am not in that dumb race. Thanks. #NotBollywood.” 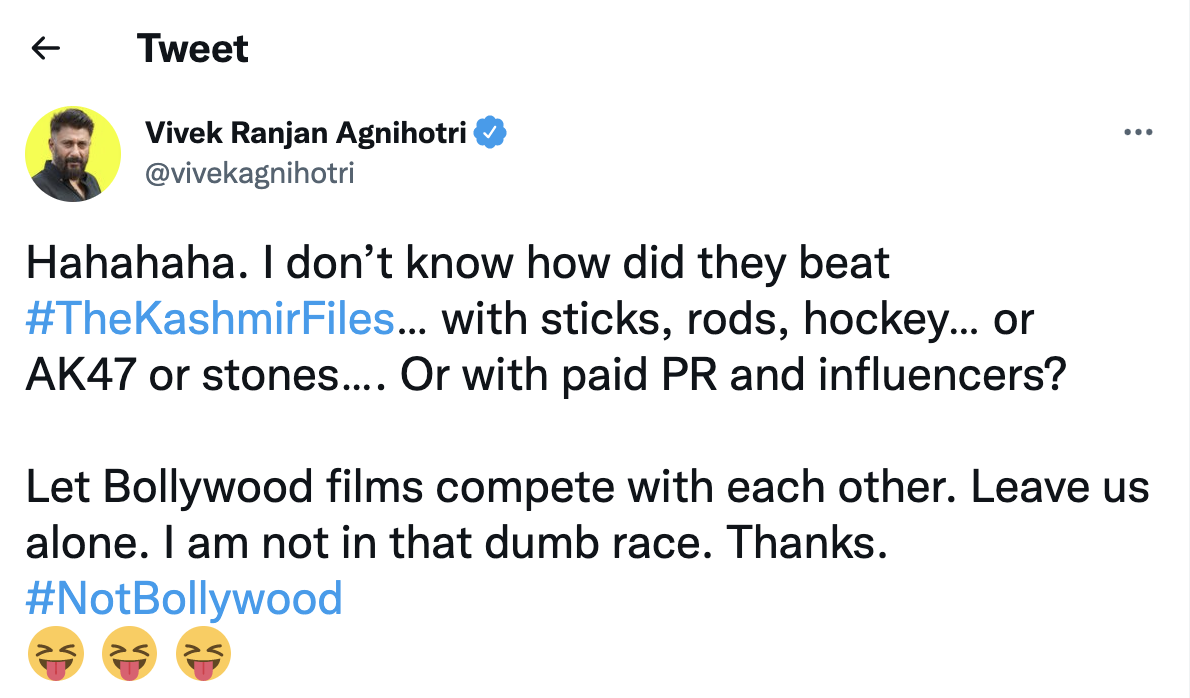 According to box office sources, Ranbir Kapoor and Alia Bhatt‘s ‘Brahmastra’ collected around 17 crores worth of sales on the ticket window on Sunday. While the overall nett domestic collection crossed ₹200 crore, the worldwide sales were around ₹350 crores. With this, the film also became he highest grossing Hindi films of this year.

Talking about the box office reports of Brahmastra, Ranbir Kapoor had earlier said in an interview, “These days, we are reading a lot where people are discussing the budget of the film. People are saying this much is the budget and this much is the recovery. But Brahmastra is unique being where the budget is not just for one film but for the whole trilogy.”

‘Brahmastra Part 1: Shiva’ is a modern mythological drama which took almost 6 years in making. The film revolves around Shiva (Ranbir Kapoor) and his journey on discovering his magical superpowers with his unique relationship with fire. Alia Bhatt plays the role of Isha, and his love interest in the film. The film also stars Mouni Roy, Amitabh Bachchan and Nagarjuna Akkineni in pivotal roles and also has an extended cameo by Shah Rukh Khan.